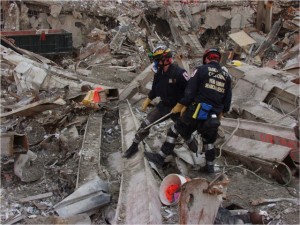 This research examined posttraumatic stress symptoms and coping strategies, following critical incident stress debriefings in three California Urban Search and Rescue (US&R) teams who were deployed to New York following the terrorist attack on the World Trade Center on September 11, 2001. This study was the first to compare different teams that responded to the same event at different times.  A survey included the Impact of Event Scale – Revised, and specific deployment questions. PTSD symptoms had no relationship to time the teams were deployed, years of experience, or a higher degree of relationship with the victims due perhaps in part to a very restricted range of responses on the IES-R.

The time each unit was deployed shaped individuals’ expectations. Task Force 1 from L.A. was deployed first and expected a rescue mission; they remain haunted by not knowing if lives could have been saved.  Task Force 3 from Oakland deployed last, respectively. This team expected to help recover bodies not rescue. Instead they were sent elsewhere in New York to cover for fire companies out of service.

Task Force 4 from Menlo Park was deployed second. This team was briefed prior to leaving California and their experiences matched their expectations more closely than the two other task forces.

In this study, debriefing received a “not at all helpful” rating from all three teams. Interestingly, rescue personnel endorsed two additional items; they would have attended the debriefing even if it wasn’t mandatory, and they would recommend debriefing to other rescue personnel. Peers (other rescue workers) were rated easiest to talk with both during and after deployment, and family was rated second easiest. Therefore, efforts to educate peers and family members about critical incident stress and to offer practical tips and resources should continue.  Recommendations for debriefing include conducting the debriefing with leadership present, scheduling it shortly after the incident, and following up with participants and issues.